Please select a from and to date to see a custom palladium pricing chart:

Palladium is the lesser-known cousin of platinum. In appearance, palladium looks similar as it belongs to the same metals group. Historically, platinum has been more expensive, however, the distance between the two metals has narrowed in recent years. At present, Platinum/Palladium Price Ratio is around 1.75, and it had been as high as 5.5 a few years ago. 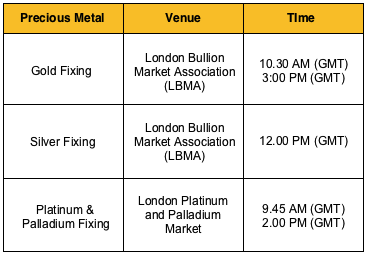 While palladium is used for jewelry, there are many industrial applications of this precious metal. A major use is for catalytic converters in motor vehicles, which help make the engine exhaust less toxic components. Palladium is also used in electronics such as cellphones and computers as well as in chemistry. Moreover, it is used in dentistry. There is potential that palladium will be used in alternative energy creation through cold fusion that blends hydrogen, electric current, and palladium.

What determines the palladium price

As with other commodities, the spot price of palladium is determined by the forces of supply and demand. The economic activity and industrial demand is one side of the equation. As it varies, so will the price. The other side, the supply, comes mostly from Russian and South African mines. The levels of production there will influence the price of palladium.

The actual palladium price is set on the floors of commodity exchanges such as the New York Mercantile Exchange (NYMEX). It is done through futures trading where speculators as well as hedgers trade the futures contracts throughout the day. Thus, the price changes from one moment to the other.

Palladium is also highly responsive to monetary policy set by the Federal Reserve. For instance, hawkish monetary tightening that took place in summer 2022 directly resulted in price jumps of about 7%. The same is true of U.S. jobs data released by the Bureau of Labor, as the price of palladium tends to rise and fall in accordance to U.S. macroeconomic indicators. This makes palladium a particularly attractive asset for those interested in day trading or taking advantage of intra-day price movements.

The expectations of these traders about future supply and demand of platinum will also influence the spot price in the present. The expectations can change based on a variety of events. For example, a strike at a mine in South Africa can lift prices up.

When investing in palladium bullion, keep in mind that you will pay a spot price, as determined by the market forces, plus a premium, which varies among the dealers.

Worried about the Economy? Inflation? National Debt? Money Printing? Currency debasement? Join our Newsletter and get expert recession-proof investment tips straight to your mailbox, completely free of charge! Join now and get a copy of our free PDF guide that will teach you everything you need to know about Gold IRA investing.
Valid email address required. Your information will never be shared or sold to a 3rd party. We only send out emails once a month. You can unsubscribe at any time.
Do NOT invest in precious metals...

...before requesting this free PDF guide. The information contained in this guide can help you save thousands of dollars in hidden fees and commissions. It's a must-have.
Your information will never be shared or sold to a 3rd party.
×